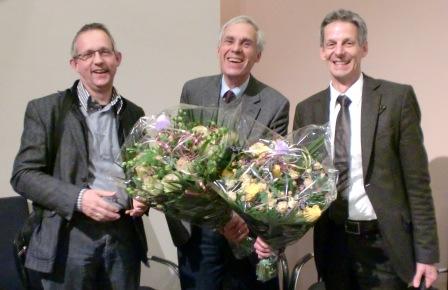 First of all I want to thank Fernando Enns for his invitation to respond this morning from a Baptist perspective on the occasion of the presentation of his impressive book. As you can see in the program I will not respond to the whole book, but I will limit myself by responding on the (and this is the title I placed at the top of my contribution) pitfalls and traps for Baptist ecumenical involvement in the area of baptism and ecclesiology. This means concretely that I will respond to chapter A.III.4-10 (pp. 87-121), which is called ‘Themenzentrierte Ökumene’ (although in my book at the top of each page it says ‘IV. Missionarische Ökumene’, but that starts actually on page 121). Here Fernando writes about theme-centered ecumenism and especially on mutual recognition of baptism.

Let me first confess that as Baptists in the Netherlands we are much less involved in ecumenical practice then our Mennonite brothers and sisters. This is due to our more evangelical-oriented spirituality and theology, but even more so due to our ecclesiology and our theology of baptism. I think a short historical insight will show what I mean.

When in 1948 the WCC was established in Amsterdam, the BU of the Netherlands became a member, with much less discussion then one might expect. This had to do with the feeling that by being invited to join the WCC the BU got the feeling that now they were taken seriously as a church and not as a sect, which had been quite common for decades. So in the climate of reconciliation after WO II and the time of together rebuilding the nation and the churches, we joined quite naturally, not so much yet knowing what ecumenical involvement would mean. In 1963 we left the WCC. When you study the letters and papers that surround this decision, you discover that there were two main arguments. The first had to do with the – in the eyes of some – growing liberal and ‘horizontal’ trend within the WCC (although in 1961 the Basis of the WCC had just been enlarged by a Trinitarian confession and an explicit reference to the Scriptures ). But a second argument was decisive: a membership of a (W)CC is not in line with our ecclesiology. For two reasons. The first concerns the independence of the local church. Since we are a Union of Baptist Churches and the local church is free to determine its own convictions and practices, it is in fact not possible to join the WCC as a national church body. Who can speak on behalf of all the churches within such a council? In fact the only possibility would be that each local church decides for itself whether to join the WCC (and the NCC as well) or not. In fact a letter was sent to Geneva just before our council that would decide on the continuing or ending of the membership to ask whether it was possible to withdraw as a Union and have the local churches to join on their own. You will know what the answer was! Impossible of course.

The second reason also had to do with ecclesiology and focused on the difference between organic and organizational union. Two leading theologians opposed each other in this debate. For Jan Louw the church is a spiritual reality, formed by believers born from above. This he saw as incompatible with the church as an institution and an ecumenical body that looks for a visible institutional unity. Louw also believed in visible unity, but this is the unity of the local church. Jannes Reiling, the first rector of the Baptist Seminary, also looks at the church as a so-called Believer’s  Church (with Johannes Oosterbaan he dreamed in the sixties of a Believers Church Conference in Amsterdam, which didn’t work out, but indirectly led to the first BCC in 1968 in Louisville, US; in 2008 the 16th was held in Winnipeg, Canada with two papers by Fernando Enns) but believed firmly that we as Baptist churches not only needed the voice of other churches, but also they needed our voice! We not only would deficit ourselves in withdrawing, but also the other churches. He didn’t think it necessary to have a common ecclesiology beforehand to become involved, but we should contribute from our tradition. We had a ‘mission’ to fulfill. But in spite of the popularity of the word ‘mission’ in our churches, the major vote in 1963 was to withdraw and so we did.

So our ecclesiology makes it very difficult to be ecumenical involved on the institutional level. We feel more comfortable within the so-called ‘ecumenism of the heart’ or ‘convertive piety’ (Stanley Grenz). Yes, we are a ‘Believer’s Church’, which means that chiefly the church is constituted not by office or sacrament, neither by the pure preaching of the Word, but by confessing believers or (even better) disciples. So the soteriology precedes the ecclesiology. Although salvation and church membership belong together (the moment you come to Christ you become part of His Church), the church is not the source (mother) of salvation, but the fruit. It is Christ who brings us to the church, not the church that brings us to Christ (although mostly ‘the church’ plays a role and is used by Christ and in that way you could say we come ‘from the church to the church’). But theologically/pneumatologically Christs salvific work precedes my membership of the church.

And here comes our second ecumenical stumbling stone in view: baptism. When confessing faith (fides qua) constitutes the church, then baptism is believers baptism or it is not. As far as we can see, three acting subjects have to be present in baptism – God, baptizer (or church) and baptismal candidate – and when we lack one of them our baptism is invalid. Now I know that today almost every biblical scholar and most baptismal documents from most churches recognize that, in the words of BEM, ‘baptism upon personal profession of faith is the most clearly attested pattern in the New Testament documents’. Also in the new Christian Dogmatics from Kees vd Kooi and Gijsbert vd Brink that will be debated here later today, it is said that ‘in theological perspective baptism on confession is the starting-point of Christian baptism. Baptism needs to be received by faith’ (546). So in light of this for us it is very difficult to recognize a baptism that lacks this personal profession of faith (at the moment of baptism).

Although Fernando Enns agrees on this, in his book he tries very hard  to find a way to come anyhow to mutual recognition of baptism and I sympathize very much with him. But by that he challenges and puzzles me at the same time. For example when BEM talks about baptism as ‘not only to momentary experience, but to life-long growth into Christ’ Fernando means that ‘Wenn anerkannt wird, dass – nach der Schrift – der Wasser-Ritus nur als ein Teil der umfassenderen Initiationsgeschehens der Taufe angesehen wird, zu dem notwendig das persönliche Glaubensbekenntnis hinzutritt, dann ist die Voraussetzung zur (gegenseitigen) Taufanerkennung gegeben’ (118). This means that in fact the time of baptism is secondary. As the Anglican Brow and the Baptist Pinnock try to bridge the gap in their book ‘Unbounded love’, reasoning from Matthew 28: Either you are baptized and then taught to observe, or you are taught to observe and then baptized, in both cases you become a disciple and that’s all that matters. I doubt it. Time does matter, since baptism is a conscious act of faith. In Baptist theology it is the moment that someone experiences assurance of faith and dedicates his or her life to Christ, in Anabaptist theology it is the moment of uniting with Christ in his way of suffering and obedience and so the first step in imitation (Nachfolge).

There is another argument from Fernando that made me thinking. This is when he writes that if we recognize a church we should also recognize its baptism, since this constitutes church membership. But as you have already understood, for us baptism does not constitute the church, faith does. Coming together in the name of Christ constitutes a church and since many infant baptizing churches come together in the name of Christ and seek to do His will, we have no problem at all recognizing them as a church. That still leaves room – as far as I can see it – to disagree about their baptismal practice and not recognize it, in the same way as we recognize the Salvation Army as a church of Jesus Christ, although we firmly disagree with their not practicing the sacraments at all.

Still unresolved is the baptism-13 paragraph in BEM, which says ‘Baptism is an unrepeatable act. Any practice which might be interpreted as “re-baptism” must be avoided’. This is a painful point for many churches and for Baptists and Anabaptists as well. But what amazes and also frustrates me is that it looks as if we are ‘the problem’. We re-baptize, the others don’t. They even recognize our baptism! So Baptists, stop it and the problem is solved. But let’s face it. Our ‘problem’ of re-baptizing is finished as soon as others end infant baptism. They – in our view – left the NT pattern and now they ask us, who want to hold to that pattern, to solve the problem that is a result of their baptizing infants. I do not think that is fair. Of course I understand that this is a historical development we not easily can change and I am not saying it is all up to ‘them’ to solve the problem, but the least we can do is look at both sides what we can do to end this difficult situation. I think that when the infant baptizing churches would consider to switch back to the NT pattern, we as Baptists should consider to end re-baptizing in this transitional situation.

In the meantime I think that we as Baptists should consider – and this is at the moment debated in our churches – to accept Christians as members into our churches who are baptized as an infant and have responded to this baptism by a personal confession of faith, either in their former church or in our midst, without re-baptizing them. At the same time we will remain bold to baptize anyone who desires a baptism on his or her confession according to the NT pattern, even when he or she was baptized as an infant.